Since July 2013, I have been volunteering at Folkestone Owl Rescue Sanctuary. Folkestone Owls is a rescue sanctuary which has been running for over 30 years, 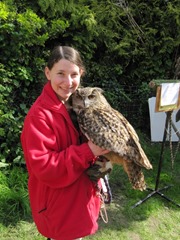 rescuing owls. These owls have been injured in the wild or come from other sanctuaries or zoos which have closed down or been unable to look after injured birds. Unfortunately, many of the owls also come to the Rescue Sanctuary because people have bought them as pets then realise that they are unable to look after them. All these owls are homed in the back garden of the one man who set up and committed his life to rescuing owls. His garden is filled with aviaries which can house up to 50 birds at one time of 8 different species. They require cleaning and feeding daily, with all the money needed to keep them dependent on public donations. Therefore, every Thursday and Saturday, the team take up to seven owls to Folkestone Town Centre where we let the public stroke them and ask questions about them, putting lose change into collection pots. This is a great way to educate the public about these 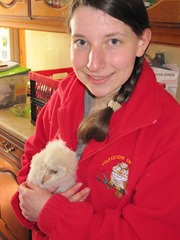 amazing birds whilst fundraising sufficient money to keep the sanctuary operating. Once a month during the summer months, the sanctuary also has open days where the public are invited to come to the sanctuary and hold an owl, finding out more about how the sanctuary runs. On these days, we run a tombola and raffle and sell owl pictures, models and posters which have been donated to us.

I love interacting with the public and have become much more confident. Some of the standard questions we get include:

How many owls are there at the sanctuary? – at the moment we have 31 owls but we can house up to 50 at one time.

Why are they at the sanctuary? – we are a rescue sanctuary so our primary aim is rescuing owls. This may be if they are found injured in the wild and cannot be returned, but most of our owls actually come to us if other sanctuaries or zoos can no longer look after them. For example, Jazz the snowy owl was blinded in one eye when it was caught on a talon in the nest. The zoo did not want an injured owl so we took him in. Many of our owls also come to us if they have been kept as pets. Owls do not make good pets and many people do not realise this after watching Harry Potter and dreaming of their own ‘Hedwig’. Finally, several of our owls have been born at the sanctuary and hand-reared. This is important because these are the owls who are most amenable to being handled, so can be taken to the town centre or to schools, earning the money needed to feed all the birds we rescue. It also creates a gene pool, supporting the wild owl population. 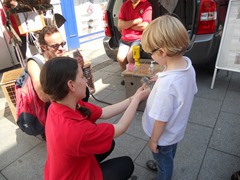 What do the owls eat? – in the wild, owls eat a variety of prey ranging from rabbits, voles and song birds to frogs, insects and sometimes even slugs. However, at the sanctuary we feed them day old chicks which come in frozen.

Is it a girl or a boy? – in the owl family, the females are always bigger than the males, so this is the main way we can tell. With some species it is possible to tell by their marking, for example, female snowy owls normally have lots of black spots whilst males are almost entirely white. Very often it can be impossible to know until they lay an egg, in which case they must be a female. Most of the owls we bring to the town centre are males because generally they are calmer and less aggressive.

Why can I not stroke its back? – although it won’t hurt the owls to stroke their back and wings, we generally advice that it is best to stroke them on their bellies only. This is because they produce waterproofing oils on their flight feathers which can be wiped off by our hands, potentially reducing their water-resistance and damaging their feathers. It is also safer if they can see your hand and you don’t make them jump by suddenly touching their back.

Do they not want to fly away? – the owls we take to the town centre are attached to our gauntlets (gloves) by their jesses. Although some of the owls may love to fly away, this is just like many dogs wishing to run away when let off the lead. The owls do not know how to hunt and therefore would not survive in the wild. Most of the owls seem to be very happy at the sanctuary where they have food, shelter and company.

I have learnt so much from volunteering with Folkestone Owl Sanctuary. Not only is it amazing to be able to handle these awesome birds which I have loved my entire life, but I have been able to realise the importance of developing good public relations and adapting to whoever you are talking to, giving them the best opportunity to be educated.