Today, my cousin got me the opportunity to look around the zoo. She often volunteers in the reptile house so she took me behind the scenes here. I met the Galapagas tortoises, chamaleons, frogs, turtles, tortoises and snakes, seeing those which are not on display to the public. These include the animals which need specialist conditions, such as peace and quiet, or to provide conditions for breeding. There was a room we were not allowed in because it contained some of the most poisonous snakes and frogs in the world. It was so exciting to realise that the zoo isn’t just there for the public but has a key role in active conservation as many of the species I saw are threatened, endangered or even on the brink of extinction with very few remaining in the wild. London Zoo are exploring breeding methods and helping to maintain the careful environments needed to help these species survive.

After this, we visited the London Zoo Veterinary Department where we had arranged a tour with the head nurse, Matthew Rendle. Matt was brilliant and gave an excellent tour, opening up the opportunity for lots of questions. The level of biosecurity was almost extreme as we dipped our shoes in disinfectant before in. However, with so many different species of animals comes more diseases, many of which are exotic with very little known about them, so the containment of them becomes even more important, especially when the animals being dealt are so precious. First Matt showed us the huge filing cabinet where the medical records are kept. Every animals which comes to the zoo has a personal, unique medical record. In this all the information about it is kept, and if it undergoes a veterinary procedure, it is here that it is recorded. In the same room was a whiteboard, on which the inpatients were listed. Animals were generally in the hospital for one of three reasons; they were either in quarantine, being treated or simply had nowhere else to go.

Some of the kennels we were not allowed into, but we were shown into a few rooms and were able to see a few of the current inpatients. This a turtle with chelonian herpes virus. Although this virus had very little impact on the turtle, it was very dangerous for some other species of animal. This is similar to human cold sores which are life-threatening for some species of primates. However, the turtle was no longer shedding the infection so soon it going to be put back with the group it had come from. 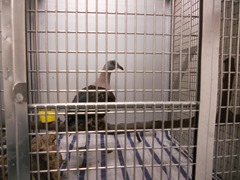 There was also a Zoe Imperial Pigeon which had suffered a wing injury. It was 26 years old and the only one they had at the zoo, therefore was very important. It was being trained to eat anti-inflammatories from from a yellow dish so could be fed specifically in the aviary and be put back as soon as possible, giving it the chance to use its wing again in a larger space, building up strength whilst still being treated. We were also shown several large tanks of caecilians. This was especially interesting because after Emma had swabbed them for chytrid as part of her PhD, they had been found positive. It had not previously been known that caecilians could be infected with chytrid and therefore was very exciting, although also worrying. There is no knowing how many different species of amphibians may be affected by chytrid. At the moment Matt was actively finding out the best methods of treating the caecilians. Many had already died because of the fungus, but there were some signs that the same medication used to bathe infected frogs was effective when added to the water tanks, but it was to find the optimum dosage and concentration.

Next we were shown into the certified rabies quarantine area. This was impressive, looking more like a prison cell than a kennel, with every effort being made to ensure that there was no possibility of rabies escaping the building. The doors had heavy bolts on them, there was special clothing which had to be worn including face masks and gloves and it was a necessity for all staff to be vaccinated against rabies. We were only allowed in because there were currently no animals in rabies quarantine. However, other animals in normal quarantine included a Prairie dog and a Burmese python. The Burmese python had just been spayed and was being kept in here where lots of space whilst recovering. Matt told us how hard it was to operate on snakes because they do not breathe when under anaesthetic so it is necessary to support them using artificial ventilation. Also in this building were some meerkats. The mother meerkat, Pipsqueak, had broken her leg and hip whilst heavily pregnant and had to undergo surgery just two weeks before giving birth. Because she had been taken away from the group to do this, she was no longer accepted into the gang. However, she had successfully given birth and to three, very cute, pups. As soon as they had been neutered, they were going to be moved to another zoo where they would hopefully be accepted into a new gang. Matt told us that the meerkats you see in zoos are much fluffier than they are in the wild as they have two coats of fur. As they live in a hot environment, in the deserts of Africa, they would normally shed the top coat. 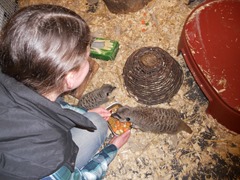 Meerkats also have a problem with high cholesterol which can lead to severe heart problems. This is something often encountered when they are kept in captivity and fed a high protein diet, such as rats. The zoo discovered this problem and now only feed them apple, carrot and dry adult cat food, which I was allowed to help hand feed Pipsqueak and her pups!

Finally we went back into the hospital and Matt showed us around the 2 operating theatres, filled with hundreds of bottles of medication, a table able to move with a load weighing half a tonne (the mass of an adult lion), an x-ray and ultrasound machine. He had selected out several x-ray images which we looked at and asked me what animals I thought they were. It took me a while to think about it but on the whole I had a general idea for most of them. 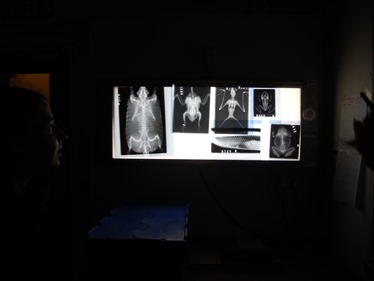 The radiographs included an armadillo, which I initially thought was a tortoise before noticing that the shell was divided into segments. Matt pointed out that an armadillo only has a carapace (upper shell) whilst on an x-ray of a tortoise both the carapace and plastron (lower shell) would be identifiable. There were two images of animals with wings – a pigeon (the Zoe Imperial Pigeon currently in the kennels) and a bat. I was able to tell the difference mainly because of the fingers in the bat’s wings. However, Matt also showed me some key difference between birds and mammals including the teeth as well as the presence of a diaphragm only in the bat. I did not previously realise that birds and reptiles do not have diaphragms but instead have small lungs with lots air sacs. I found incredible but also bizarre to understand and would like to do more research into this. Other images included two frogs of very different sizes – the larger one was a Mountain Chicken (yes, it is a frog!). The last image was of the Burmese python which had been spayed, on the picture we could also see a whole rat inside the snake! Matt hadn’t realised that the snake hadn’t yet digested its last meal when the x-ray had been taken but it was a brilliant picture. 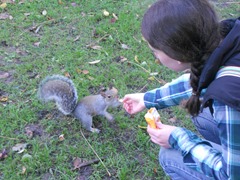 On the way home we fed mini cheddars to some friendly squirrels in Regent’s Park. A fun end to a fascinating day, though maybe not the ideal diet for a squirrel.