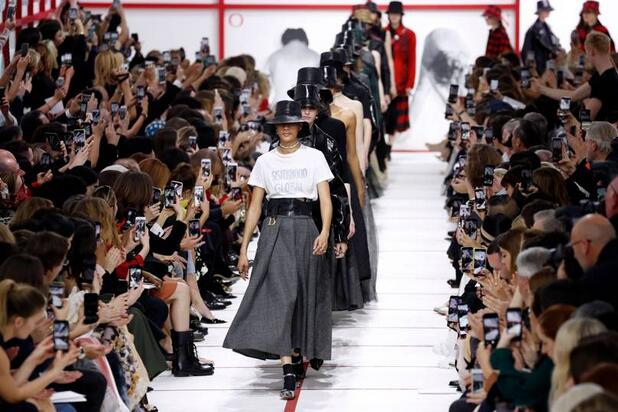 Following three weeks of couture-influenced shows in New York, London and Milan, the biggest surprise of the autumn/winter 2019 season was the message in Paris: clarification, simplification, and purification. “I think a dress has to be wearable. Otherwise it’s a piece of art you can put on your wall. You have to make creative pieces for real life. If I buy something it’s because I want to use it every day,” Maria Grazia Chiuri said of her Christian Dior show, which interpreted the codes of the house in contemporary and practical manifestations that felt decidedly shopping focused. “If you are a brand with such a huge history, you have to maintain the codes. But the brand has to be contemporary, so I think about maintaining time. I don’t think a brand like Dior has to be so close to the idea of seasonal. You don’t buy a piece for one season only.” It’s widely acknowledged that Chiuri’s collections – of a more accessible nature than past creative directors’ – have increased sales at the house. That watchful eye of retail and revenue continued to hover over the Paris shows.

“This house has a such a long story but my job is to modernise it make it appealing to the customer we have today. That was the exercise,” Demna Gvasalia said after a 109-exit Balenciaga show that appealed to every corner of his potential customer base, based as it was on the social classes of Paris. Underlining the shopping-focussed mentality, models on the runway carried Balenciaga carrier bags and quilted handbags that resembled nets familiar to grocery shoppers. “It’s for people who actually love fashion and go shopping. That’s what I do,” Gvasalia shrugged. “I thought it was real. When I walk down the street in Paris now – which is rare – that’s what I see.” The Balenciaga show sometimes bordered on the reduced to a degree of irreverence, at least in the context of a runway collection. But if you came to see the couture shapes and Parisian pizzazz that prevailed elsewhere in the fashion landscape, Gvasalia provided for that, too.

At Maison Margiela, John Galliano had been thinking about the impact of the excess that surrounds us in the digital age. “We are overwhelmed with so much imagery that you almost want to regurgitate,” he said, in podcast for his haute couture collection, in January. “But perhaps inverted excess could lead to something a little more minimal?” Three weeks on, Galliano presented just that: a ready-to-wear collection that reduced the techniques and codes he’s been developing at Maison Margiela over the past five years to a succinct core that made you want to buy each and every of those coats and suits straight off the runway.

In self-penned show notes, Andreas Kronthaler wrote about “reducing the product to its essence”. In short: “I’ve just made the necessary things. In the showroom, too,” he explained. His eponymous collection for Vivienne Westwood strived to repurpose the very way in which the manufacturing process works, using the many sample cloths factories make for the industry. “One tends to throw things around and be a bit unsure, but this time I had to be careful not to waste anything and not make anything I didn’t need,” Krontahler said.

While he was the only designer – apart from Stella McCartney, who lays great claim to the territory – who mentioned sustainability as the reason for Paris’ newfound sense of reduction, it went hand-in-hand with the idea of building a wardrobe not so driven by disposable trends. It was reflected in the sophomore collection of Hedi Slimane at Celine. While, for the last six months, the designer let the congregated fashion industry believe he was going to turn Celine into a continuation of the codes and silhouettes he built at Saint Laurent, it turns out he was biding his time for the plot twist in chapter two: the observance not of Phoebe Philo’s opus at the house but of the original Celine archive that inspired Philo in the first place. With its faint air of the 1970s, its masculine outerwear, bourgeois heritage culotte suits, French country dresses, and bohemian ponchos and teddy bear coats, it had a distinct echo of the elegantly pragmatic wardrobe so called for in fashion at the moment.

The wardrobe Philo created at Céline was often referred to as comprising “intelligent” clothes. Since her departure, designers have seemed keen to take the reins of her sophisticated, handsome form of glamour, something that was clear in critically applauded shows from Paco Rabanne and Chloé to Loewe. It also appeared at Lanvin, where Bruno Salielli – a former Loewe and Rabanne designer – had his debut, presenting a collection that fell into the arty and eclectic corner of fashion exemplified by the Loewe he came from. In its patchwork of nomadic and folkloric elegance – a richness of fabrication, surface decoration and peculiar cuts and layering – it looked like Loewe: a little bit rooted in art, in pseudo-intellectualism and of course “the traveller”. The look was part well-to-do gallerist and part eccentric librarian. But Paris wasn’t without its glamorous moments.