I really can’t believe that it is just under a month since I last posted! Time flies when you’re having fun! Speaking of which, I really have no idea where the time has gone. Last week was mostly taken up by work experience at West Forest Farm Racing ( See previous post) which was incredibly tiring, but fantastic fun and this week has been taken up solely with homework and revision duties! I am however, still not even nearing the end of the endless piles of work to get through, and I am incredibly thankful that we have a staff development day Monday! I seem to also have been blessed with a particularly useful trapped nerve in my neck, preventing me doing much at all! Anyway whinge over!

A couple of weekends ago, Twiggs and I embarked on our first weekend competing in two years! I must say, at the time it was a ceremonious event! This also saw Twiggs compete in his first ever dressage event at Kingfisher Equestrian on the Saturday! He came out with a 65% in his first class and a third place, and an astonishing 71.5% in his second class coming joint first! Not a bad attempt at all. Then the following Sunday he had to put his Showjumping hat on, which he most certainly did with a win in the 2 ft 3 (we’re starting small after our break) and a fourth in the 2 ft 6. 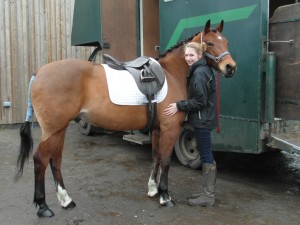 Twiggs and I on Dressage prep 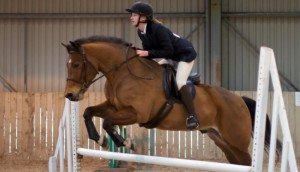 Last weekend was a bit of a break from the normal weekend routine of going to my dads and working. We had a charity gymkhana at the yard in aid of one of the women’s niece as she had been battling with cancer, and we were raising money for Great Ormond Street Hospital. Thankfully the sun shone, and it all in all turned out to be a fantastic day! It was nice to get everyone out in the sunshine together and play with the horses. Twiggs and I didn’t do too badly either with a win in the chase me charlie, and I won a lemon cake in the raffle (it was rather delicious)! The Sunday was primarily taken up with a morning of cross country schooling at Toomer Farm. Luckily it was again a lovely sunny day which allowed Twiggs and I to tackle our greatest fear… The dreaded drop! Thankfully we both came out ok, and after a couple of attempts we’re finally getting there! We also did come out rather damp after a cat leap into the water, but we’re in one piece! 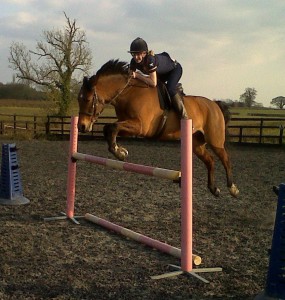 Our Chase me Charlie winning jump 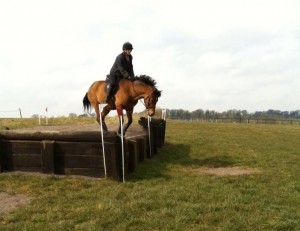 Finally, this week we had a bit of a surprise when Lucky (our dog) started urinating very bloody wee. Due to his disabilities we’re very cautious about what we put him through so that we put quality of life over prolonging his life. The symptoms were very similar to a urinary tract infection that he has had before, so we took him to the vets to get it checked out. He has been put on antibiotics as an assumption that it is the same again, and thankfully the blood has stopped, and he doesn’t look as sorry for himself! He will continually get these infections due to the fact that he cannot clean himself. We are however aware that his condition is slowly deteriorating, and if he ever seems in pain with his condition, we will do the kindest thing and put him to sleep. Currently however, he is doing well and he is progressing well with the antibiotics.

Anyway, back to school next week and the onslaught of ISAs and exam preparation begins! Also got some open days to book when they open for bookings. The next big event seems to be my birthday followed by RVC’s open day. Hopefully being able to learn to drive will help me somewhat with getting to all of these work experience placements!