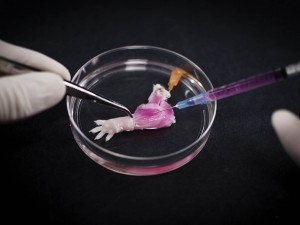 Harald Ott and his team at Massachusetts General Hospital in Boston have successfully grown a rat forelimb from living cells for the first time (see image above). This breakthrough offers hope that one day in the future, amputees will be able to receive biological replacement limbs that function properly instead of artificial limbs. The main problem with artificial limbs is that they don’t work as well as real limbs. Another common problem is that the recipient has to take immunosuppressive drugs for their whole life to prevent their immune system from attacking the hand (the transplanted hand is recognised as a foreign mass by the immune system). This problem wouldn’t occur with biolimbs as they only consist of the recipient’s cells and so they won’t be rejected by the recipient’s immune system.

But how did the team manage to do this? The did this using a technique called “decel/recel” (short for decellularisation and recellularisation). In the first step (decel), the soft tissue of organs of dead donors is stripped off using detergents, leaving the collagen “scaffold” of the organ, which in this case includes the collagen structures that make up the blood vessels, muscles, bones and tendons. In the second step (recel), the flesh of the organ is recellularised by seeding cells from the recipient into the scaffold, which is then grown in a bioreactor and provided with nutrients and oxygen so that new tissue can be grown.

To create a forearm, human endothelial cells were then injected into the collagen structures of blood vessels to make the vessels stronger. Myoblasts, the cells that grow to form muscles, were then injected in the areas of the scaffold that were normally occupied by muscles. In just two to three weeks, the blood vessels and muscles had successfully been rebuilt. Next, the team used electrical impulses to activate the muscles and found that the limb’s muscles were working properly.

However, there’s still a lot of work to do as there are still many hurdles to overcome. Ott and his team still have to test if the cartilage, bone and other cells in limbs can be regenerated and if a nervous system will develop in the biolimbs. Although the team have shown that primate forearms can be decellularised in the same way, we’ll have to wait for at least 10 years before the first biolimbs for amputees can be tested on humans.

There is also a short video about this on YouTube: https://www.youtube.com/watch?v=SSLijQUNUz8