They are the largest land animals in the world, weighing up to 14,000 pounds and standing up to 4 meters tall. Given their size, elephants should be highly susceptible to cancer – they have at least 100 times more cells than humans – but they rarely develop the disease. In a new study, researchers shed light on the mechanisms behind elephants’ resistance to cancer – information that could fuel knowledge on cancer resistance in humans.

Theoretically, an animal’s cancer risk should increase with their size and lifespan; the bigger an animal is, the more cells they have, which should increase the rate of cell division and susceptibility to gene mutations.

In 1975, however, a study by Dr. Richard Peto, of the University of Oxford in the UK, challenged this notion. He observed that cancer incidence across species is not dependent on an animal’s size or lifespan – a theory that is now hailed “Peto’s Paradox”

Previous research has suggested that specific molecular mechanisms in elephants protect them against cancer, though Dr. Schiffman and colleagues note that such mechanisms are poorly understood.

He points out, however, that modern humans are particularly vulnerable to cancer, which is more down to lifestyle factors – such as smoking – that are not seen in other animals. “These behaviors are relatively recently acquired by humans, over a few hundred years, and the risks they impart far exceed prior and otherwise effective cancer suppressor mechanisms that were inherited from primate ancestors,” explains Greaves. 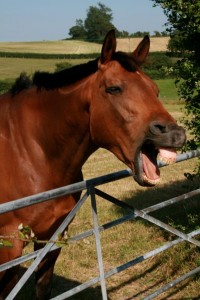 Horses share some surprisingly similar facial expressions to humans and chimps, according to new University of Sussex research.

Mammal communication researchers have shown that, like humans, horses use muscles underlying various facial features,including their nostrils, lips and eyes to alter their facial expressions in a variety of social situations.

The study builds on previous research showing that cues from the face are important for horses to communicate, by developing an objective coding system to identify different individual facial expressions on the basis of underlying muscle movement.

The study’s co-lead author, doctoral researcher Jennifer Wathan, said: “Horses are predominantly visual animals, with eyesight that’s better than domestic cats and dogs, yet their use of facial expressions has been largely overlooked. What surprised us was the rich repertoire of complex facial movements in horses, and how many of them are similar To humans”

Despite the differences in face structure between horses and humans, it was identified some similar expressions in relation to movements of the lips and eyes.