Midway through a Gliding Course that I attended over the half term holiday, I found myself crouching over a kitchen sink, pinching my nose every so often for a period of five minutes…why? I had a nosebleed. Coincidentally, I had recently read a blog (Rebecca Underwood) and an article in the BMJ (No.7849,24th March 2012) regarding Nosebleeds and their prevention; hence why I thought it would be fitting to write a few paragraphs about them!

Epistaxis, Definition: A hemorrhage from the nose…a.k.a: a Nosebleed. It comes from the Greek language meaning: “a dripping,” especially of blood from the nose. 85% of the time, nosebleeds are idiopathic (they happen spontaneously without a known cause).

The majority of Nosebleeds happen because of a rupture of tiny vessels in the anterior nasal septum.

Now we know the causes, we need to know the solutions.  If you were a Doctor, you would initially begin First Aid as the priority is to prevent the bleeding first before further investigation. You would seat the patient, ask them to breathe through their mouth, and get them to lean them FORWARD. (This is because you want to minimising swallowing the blood and stop blood entering the pharynx/throat area). Besides, losing a few drops of blood shouldn’t kill you. After applying to be a blood donor, I have read that it takes between 4-8 weeks to regain lost blood anyway). You would then apply pressure at the soft part of the nose for 10 minutes-or until the bleeding stops. If the bleeding didn’t stop then it’s: TO THE HOSPITAL! In the back of your mind, you should be thinking of the patients history: Previous Nasal Surgery, Medication, other Medical History etc…

Once the bleeding has stopped you would use an otoscope/torch to determine where the bleeding point is inside the nose. It is often seen as a red dot: 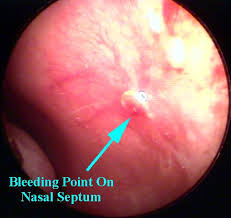 The usual treatment would be to apply some pressure (Maximo Park-for any music fans), place cold ice packs onto the bridge of the nose, lean forward, and don’t pick the nose! The main aims of this method is: Vasoconstriction. Other precautions taken are to avoid hot food and drinks which cause vasodilation. Another suggestion mentioned in Miss Underwoods’ blog was the use of cured Salted Pork: http://medblog.medlink-uk.net/beccaraku/2012/04/17/nothing-cures-a-nosebleed-better-than-a-bit-of-pork/. However, a permenant treatment may sometimes be neccessary for those who have frequent nosebleeds…

This method basically results in the destruction of some tissue in the nose. It can close the wound to prevent any further bleeding. There are various types of Cauterization:

There are also techniques used in Cauterization:

The Procedure for this method is shown through the following video:http://www.youtube.com/watch?v=DGY_HKu5d18

Thank you for reading  this article and I hope you enjoyed reading it… Until next time!!