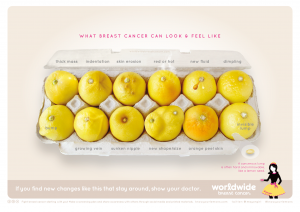 Cancer. A word which can ignite fear in anyone. Recently as I’ve been scrolling through my social media I have come across an ingenious image, which presents what the symptoms of breast cancer can look and feel like. Surveys by the charity, ‘Breast Cancer Care’ found that 1/3 women don’t check regularly for signs of breast cancer, and thus he ‘Know Your Lemons’ campaign has enormous potential to save lives. It is an example of how public platforms can be used to raise awareness across the world, a clear and colourful campaign which portrays vital information in very little words.

Breast Cancer currently has a 78% survival rate in the UK with 27% of cases being preventable [1]. This means, that educating people about the signs of cancer can help it be caught early, making a persons life much easier to save. However, it is clear that many people don’t feel comfortable talking about their bodies, even with a doctor which makes this a much harder feat to overcome.

However, the ‘Know Your Lemons’ campaign initiated by Corrine Beaumont, uses lemons as a metaphor for breasts, and draws attention to breast cancer in a memorable way – lemons in an egg carton. I find this an incredible way of increasing people’s cancer of survival, purely through helping the symptoms of the cancer be recognised.

Aside from this, since ‘Know your Lemons’ began in 2003, it has actually helped people gain the confidence and knowledge to see their doctor about breast cancer. For example, Erin Smith Chieze, who was diagnosed with stage 4 breast cancer after recognising and indentation in her breast, following a similar image. She has said that without seeing the picture, she ‘wouldn’t have known what to look for’.

This campaign has opened up the potential of social media and the internet in raising awareness about health issues. While the NHS has an extensive website and there are online GP’s and the likes available, this really stuck with me. Facebook, Twitter and Instagram are all platforms millions of people use every day, and this campaign brings information to people, without them having to look for it. People can become increasingly aware of symptoms without searching for them, and this campaign shows clear advances in how internet is used to educate people about health issues.