This week, as part of our biology AS I dissected a rat. As someone who is vegan, this was morally quite difficult for me, however once I had overcome my initial emotions, I learnt a lot from the practical – both about anatomy and ethics. 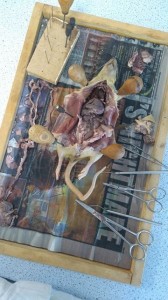 I found it incredibly interesting to look at the ratio of the length of the rat and its small intestine, which was easily 2 if not 3 times longer than the rat itself. We focused initially on the digestive system, locating the stomach, ileum and large intestine. This was incredibly useful in realising what we have learnt about the surface area and ‘coiling’ of the small intestine, and how this helps absorption. What was also particularly apparent was how large the liver of a rat is, while not surprising due to its vast number of functions such as deamination, it was by far the largest organ inside the rat.

I then went on to dissect the chest cavity of the rat, removing its ribs using sharp scissors and a blunt nosed seeker. I was surprised with the positioning of the lobed lungs, as I found a particularly large right lung but a  considerably smaller left lung. However, this makes a lot of sense as the heart is slightly angled towards the left hand side of the rat, and the left side of the heart is larger than the right – therefore a smaller lung compensates for the larger side of the heart. 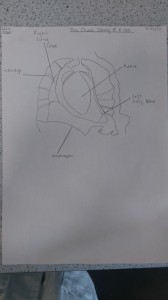 I drew a scientific drawing of the chest cavity of my rat (left), representing what I could see in the clearest way possible. This was a good opportunity to practice this skill, however the dissection skills I learnt were of much more importance. The significance of making a clean incision and angling your scissors up, to keep the insides intact, but as I progressed through the dissection I also found I was picking up the right tools more frequently – those which would do the least damage to the organs. 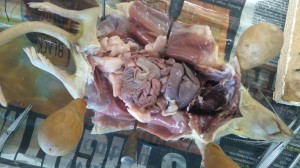 While I can’t say I’m an aspiring surgeon, this was an incredibly interesting experience and a huge personal achievement. I do believe that I would find operating on a human, who could consent, much less morally conflicting, than on an animal bred for dissection. Although, this experience has allowed me to partake in something I may find hard to agree with, it has taught me to put my feelings aside to do what is important (in this case, for my learning). This is something which applies easily to a medical professional, and a realisation I will take with me into my future career.

(I hope no-one is offended by these photos, and if you’d rather me take them down please don’t hesitate to leave a comment)