At MedSim I got my hands on a rather interesting piece of technology called HoloLens. While most people would describe HoloLens as virtual reality, it actually produces an experience called augmented reality. The benefits of this is that it allows the user to interact with virtual objects mixed in with their own surroundings. This means that the HoloLens has vast potential to be used in real-world scenarios.

Using the HoloLens is similar to Tony Stark’s manipulation of 3D Hologram objects in Iron Man. With the HoloLens you are able to control virtual objects in a variety of different ways. For example a human heart consists of four chambers with veins leading blood to the heart and arteries taking blood away from the heart. By using the HoloLens you can observe a 3D model of the heart and look at cross sections from any angle! Not only this but you can also “splice” the heart which will separate the components of the heart. Immediately we can see that the HoloLens has brilliant practical-based learning potential as this concept can be applied to all organs of the body.

I was also surprised to find out that the HoloLens is already being using for minimally invasive surgery. A company called Scopis has integrated the HoloLens into its image guidance navigation system for open and minimally invasive spine surgery. During operation the surgeon wears the HoloLens and sees a mixed-reality overlay directly on the patient. This is far more accurate since the surgeon can see exactly where to put the screws in the spine thus massively reducing the chance for complications during surgery. HoloLens can similarly be used for neurosurgery as tumours can be located much faster and with higher accuracy.

While there are some limitations with the current state of the HoloLens I have no doubt these will be overcome in the next few years. I am also looking forward to see the ways in which HoloLens will reform the medical scene in the future. 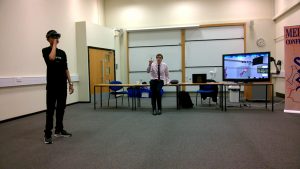 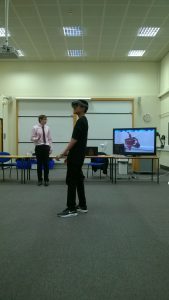